Lawrence M. Schoen, an American author, publisher, psychologist, hypnotist, and expert in the Klingon language — and a friend — has compiled what may be one of the more fascinating F&SF books for this year — EATING AUTHORS: One Hundred Writers’ Most Memorable Meals .

Laurence, in addition to having written some notable SF, is also a gourmand and is married to a gourmet chef, and he’s known for putting together gourmet dinners for other authors at outstanding restaurants in the vicinity of F&SF conventions (we each paid for our own meals, but I doubt we ever would have found the restaurants outselves). Less fortunately, he recently recovered from prolonged cancer treatments, and as both thanks and payback, he has put together EATING AUTHORS as a kickstarter project, but 100% of any profits after publication costs will go to Cancer Research and the SFWA Emergency Medical Fund.

The kickstarter will go live tomorrow, and the link to the campaign’s webpage is: https://www.kickstarter.com/projects/schoen/eating-authors. 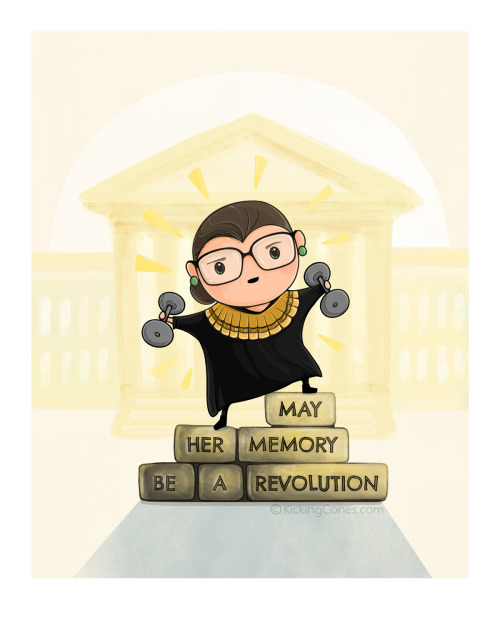 I don’t use Siri, that helpful aide on my I-phone. In fact, I’ve never even enabled Siri. Nor do I use Cortana, the aide on my Microsoft Surface Pro. I don’t have Alexa, either. Despite the fact that each of these “helpful” digital aides were created and manufactured by different corporate behemoths, they all share one characteristic.

And, no… it’s not that they can be as frustrating as they are helpful, not that I’ve experienced such, but I’ve certainly witnessed others fume while trying to use such devices.

What’s most insidious – and depressing – is that they all arrive on your device programmed to perpetuate a sexist stereotype. They’re all devices that, at least in theory, must obey their “master,” and they’re initially programmed with female voices. I’m certainly not an extreme and radical feminist, and I’m probably slow to come to this conclusion, largely because I don’t use any of them, but I find it troubling that “subservient” devices are programmed with clearly feminine voices – not male voices, not androgynous voices, but women’s voices.

Whether intentional or not, whether it’s a marketing decision or not, the use of women’s voices for such electronic “servers” is a continuation of the cultural assumption that all matters dealing with the home or subservient clerical tasks are “women’s work.”

I read widely and voraciously, and I only recently came across a reference to this (in the latest issue of Science), although Siri, Cortana, and Alexa certainly aren’t new, but the fact that the use of the female voice as a subconscious indicator of subservience is so widespread and so unremarked indicates to me exactly why women are still fighting for equal rights and treatment in so many areas. In a very real sense, every use of Alexa, Cortana, or Siri reinforces a cultural stereotype of women’s roles as subservient.

Is it necessary to block off streets to cars to create "low traffic neighborhoods"? by Richard Layman (noreply@blogger.com)
Monday September 28th, 2020 at 11:07 PM

Rebuilding Place in the Urban Space

An e-list post shared the journal article "Low Traffic Neighbourhoods, Car Use, and Active Travel: Evidence from the People and Places Survey of Outer London Active Travel Interventions," which describes an initiative in London to create "low traffic neighborhoods" by blocking off streets to motor vehicles with bollards and other measures.
It's definitely useful as an experiment. But we have plenty of information at our beck and call to shift significantly more trips to sustainable modes without blocking off streets, etc.
1.  Developing places, including infill within existing places, at an intensity that can support transit and proximate amenities able to serve trips without "having to drive."  It means creating a set of origins and destinations that operate over comparatively short distances--a grocery store within two miles, rather than 5 miles away, etc.  Or having delivery options so you don't have to drive to a store to be able to bring back what you purchase, etc.
People tend to fight this tooth and nail, especially in terms of denser infill development, claiming it will have catastrophic impacts on neighborhood character and quality of life.  My experience in DC, where infill is pretty surgical, in commercial districts and on transit station sites, is that it has extranormally positive benefits in terms of adding density in a manner that supports transit and other sustainable modes and the provision of neighborhood retail and other amenities.
2.  Creating an integrated set of sustainable modes which work collectively to support not owning a car, not relying primarily on the automobile to get around.  I call this the sustainable mobility platform, but used to call it the mobility shed.
I argue that DC is a market leader in this, which many term "mobility as a service."
Even in DC's outer city, where transit is less frequent and there is less station density for the subway, by combining the various services/modes, it's easy to get around without owning a car.
On our block, we were the only household to do so, but it was not an imposition.  A bus line was 2.5 blocks away and a subway station and a substantively sized neighborhood commercial district was 0.75 miles away.  Larger commercial districts, accessible by bus, bike, walking, subway, and car share, were 2, 2.5, and 3 miles away.
But for this to work optimally, you need access to multiple modes. Losing one, such as one way car share when Car2Go exited the North American market, makes the system much less viable. 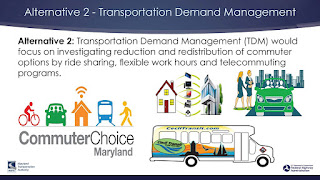 3.  Transportation demand management programming and marketing.  But another element is programs to assist people in making the transition In the US, there are very few examples of this. This is called Transportation Demand Management and assistance programs are pretty weak and mostly nonexistent.
I have written about that here, mostly wrt biking ("Revisiting assistance programs to get people biking: 18 programs").  Take up of biking as transportation still lags significantly the opportunity it presents. (Although a big problem with biking is trips with two or more people.) 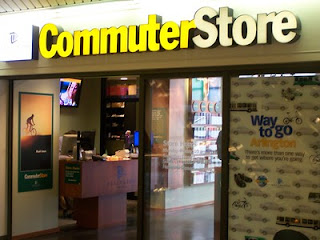 Arlington County Virginia's Commuter Stores were an early best practice example of promoting transit, but have a very limited focus on other modes and are in need of a reboot, given the relentless marketing of the automobile.
The best way to think about this is that car ownership is heavily marketed and supported.  If you want sustainable mobility to be able to compete it has to be equally well marketed and supported ("LimeBike and "scooter lifestyle stores" as an example of forward marketing for sustainable mobility").
The difficulty of finding parking encourages people to shift to other modes.  Otherwise, when people living in places where the cost--tangible and intangible--of owning a car is high, like the core of Washington, DC, New York City or Hoboken and Jersey City, New Jersey, where off street parking is rare or expensive and the supply of on-street parking is limited, they manage to "learn" how to do this on their own.
High transit fares can be a disincentive.  The cost of transit can be an issue.  DC in particular has high cost transit compared to cities like NYC or SF, which have comparatively cheap monthly transit passes.
4.  Delivery of goods, ride hailing.  WRT the question of pick up and drop off of people and goods, I wasn't sure if that was meant positively or negatively. In fact, pick up and drop off of people and goods can be either.  And in appropriate amounts, both are part of the sustainable mobility platform.  Taxis of course go back hundreds of years as a mode. 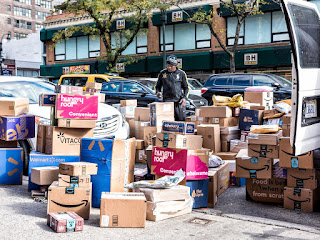 With delivery, it can mean transporting goods and deciding not to buy a car, which is good.
Or if you have e-commerce and a focus on delivery of each item purchased separately, without consolidating deliveries to particular addresses, it's another form of congestion ("How online shopping snarls traffic on city streets," Curbed").
The same goes with people. Uber and other ride hailing services usually induce trips and capture trips that would have otherwise been accomplished by more sustainable means ("Uber and Lyft Admit They're Making Traffic Worse," Bloomberg).
Or you can have what I call intra-neighborhood or tertiary transit services which move people between transit stations, commercial districts, and home, and further encourage people not to drive an automobile.

5. Trip chaining. As someone who bicycled primarily from 1990 to 2019, because of the time and energy cost of biking, I was seriously focused on trip chaining.
For people who see driving as the natural and preferred way to get around, and have less demands on their time, they tend to be specifically focused on accomplishing trips/.goals separately, rather than in an integrated fashion.
This is another element of TDM that needs to be constantly marketed and reinforced. 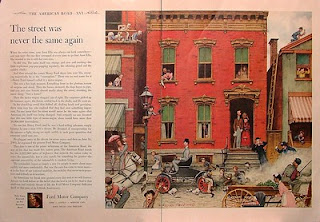 His social media reach that outstrips Trump’s and social conscience that defies Trumpism have the worst people wanting the basketball star silenced.